It has been an honor to see you grow up in NASCAR. Your journey from the Drive for Diversity program in 2010 to driving in the NASCAR Monster Energy Series to a second-place finish at the Daytona 500 is nothing short of impressive.

You have always been a pioneer, even in your introduction in the NASCAR K&N Pro Series East. You won your first race becoming the youngest driver to win at that track and in the series. In your rookie series, you became the first African-American driver to win in a national series since 1963 by winning the Camping World Truck Series Kroger 200 at Martinsville Speedway. Your talent was recognizable then and only continues to grow.

While you are the first full-time African-American NACAR driver since Wendall Stewart in 1971, you won't be the last because you are showing an entire generation of young African-American drivers that it doesn’t have to be a dream, that it is, in fact, a possibility. For all of the little boys and girls who dream of one day being the next Bubba Wallace, thank you for showing them that anything is possible.

In 2006, I formed Curry Racing Inc., to compete in the NASCAR Craftsman Truck Series and we became the first African-American team in the Craftsman Truck series to have sole minority ownership. Logic tells us that because there is a first there will be a second and a third and so forth.

Thanks to your influence and role modeling I have no doubt this is just the first of many doors to open for African-Americans in NASCAR. 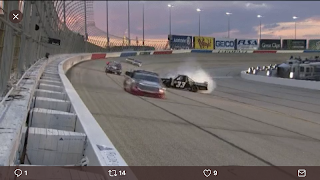